This Doesn't Happen To Me Very Often 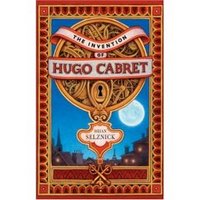 I'm usually way behind on my reading, but last night I finished The Invention of Hugo Cabret by Brian Selznick and what do I learn today? It's a finalist for this year's National Book Award for Young People's Literature. I feel so cutting edge.

And it's about the early days of French filmmaking! Can't think of too many kids' books on that subject.

I felt Hugo Cabret was well-written, but, except for the great historical details, the basic story seemed familiar. A pioneering genius in some field (here it is film) disappears from public view only to be rediscovered by children who bring him to the attention of the public after years of neglect. Granted, it's going to be a fresher story to a child who hasn't read as much as a grown-up. Another problem this adult reader had is that I could never get immersed in the story for any length of time. Whenever I was beginning to get into the world of 1930s Paris, I'd have to shift from reading to following the narrative through images instead of words. The jolt took me out of my reading zone. This long-time reader needed more text. Again, a child reader who isn't set in her ways probably wouldn't. She'd probably be more flexible and be able to shift back and forth much more easily than I could.

Last winter while I was at a library conference, one of the participants spoke very highly of The Invention of Hugo Cabret. She said the book worked marvelously for reluctant readers. The pages of illustration aren't just illustration. Each page carries the reader through a portion of the story--say, a chase scene. Evidently this gives gives kids who don't care for reading a break. They're still moving along, but not at that task they don't like. Books like this may encourage such children to read.

In spite of my own reading experience with Hugo Cabret, I have no problem with it being a finalist for the National Book Award. It's an innovative piece of work, and innovation isn't always rewarded. It's good to see it get some attention here.

At his website, Brian Selznick links to George Melies'A Trip to the Moon, which plays an important part in Hugo Cabret. Once the astronomers get to the moon, the movie really does become quite impressive, and it's easy to see how early filmgoers would have been taken with it. Selznick also links to a Smashing Pumpkins video that uses imagery from Melies' movies.

Going to both those sites ought to keep you busy for the next fifteen minutes or so.
Posted by Gail Gauthier at 6:22 PM
Email ThisBlogThis!Share to TwitterShare to FacebookShare to Pinterest
Labels: Reader response

I liked the book, but also found it hard to go back and forth with the text and illustrations. But the actual story was so short, that two days later I just read it again straight through.

I can't read graphic novels either. I just...can't.

I loved Marvel comics when I was a preteen but I find it difficult to read comic books now because the shifting between text and illustration seems like too much effort. They no longer attract me at all. I've read some graphic novels, but the only one I really liked was American Born Chinese.

I wonder if after a point in a person's reading history/experience she becomes hardwired to read a certain way. Those of us who grew up primarily with text and linear storylines that pull us along through the story need that kind of reading experience as adults. People who grow up with text and images that require the reader to do a different kind of thinking/reading, going back and forth between text and illustration, will end up wired a different way.