Last week, while I was reading through a power outage, I polished off two lovely picture books notable for being pure entertainment with no improving ax to grind whatsoever.

You know those cuter than ick photos people e-mail you of dogs and cats cuddled up together? Aaah, right? Well, Woof, A Love Story, by Sarah Weeks with illustrations by Holly Berry, does that without the ick. It's a very charming book in verse about star-crossed lovers who can't communicate but manage to find each other anyhow. 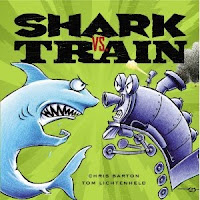 Shark vs. Train, by Chris Barton with illustrations by Tom Lichtenheld, might be described as a Deadliest Warrior episode for the toy box. These two toys don't just battle it out nose to nose but compete against each other in a series of events. Be sure to check out the pre- and post-shark and train illustrations so you'll get the full story on what's going on here.

By the way, Shark vs. Train recently got a mention in The New York Times Book Review.
Posted by Gail Gauthier at 6:52 PM
Email ThisBlogThis!Share to TwitterShare to FacebookShare to Pinterest
Labels: 2009, 2010, Picture books, Reader response