A Side Of Lincoln I Can't Really Say I Knew 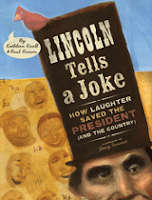 We had no power for an hour or so Wednesday afternoon, one of my workdays, so I knocked off a few picture books I'd picked up at the library. Among them was Lincoln Tells a Joke by Kathleen Krull and Paul Brewer with illustrations by Stacy Innerst. Though it's one of those picture books that's a little long on text so that I can't tell who it's actually written for, I liked it.

What I particularly liked about Lincoln Tells a Joke is that it deals with just one aspect of a historical figure's life--in this case, the fact that Lincoln enjoyed humor and used it. While I was aware that Lincoln was supposed to be fond of an outhouse joke about Ethan Allen, I just figured, who wouldn't love an outhouse joke about Ethan Allen? I definitely wasn't aware that he was something of a humorist.

A children's book that covers an aspect of a historical figure's life that isn't well known seems like a very fine idea to me. God knows, they're sure to get plenty of the same old-same old regarding the people of the past.
Posted by Gail Gauthier at 7:02 PM
Email ThisBlogThis!Share to TwitterShare to FacebookShare to Pinterest
Labels: 2010, nonfiction, Picture books, Reader response