A Day At The Fair

Well, I walked over to the Connecticut Children's Book Fair today where I attended a talk given by Jon Muth, whom I like to think of as the Zen bear guy. He inspired me to do some sketching for my work in progress. I'm not talking about creating illustrations here, folks. Don't panic. I'm talking about laying out the street the kids live on, doing a site plan for one spot, and planning a couple of cemeteries that will figure into the story. I've had to do floor plans of houses for books I've been working on before, but Muth made me feel that maybe starting my day with that on Monday might be a more creative jumpstart than, say, yakking with my friends on the kidlitosphere listserv, or slipping back into my old pre-writing ritual/transitional activities of checking news sites and playing solitaire.

I also bought a copy of The Phantom Tollbooth, which Norton Juster signed for me. 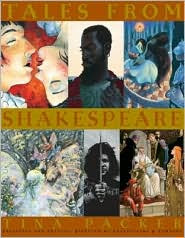 While I had my wallet out, I bought Tales From Shakespeare, a book of prose versions of ten of Shakespeare's plays by Tina Packer. I was able to have it signed by both Muth, who illustrated the introduction, and Barbara McClintock, who illustrated As You Like It.

So, you may ask, Gail? You and Shakespeare? Since when? Okay, this is why I bought the book. You know Charles Lamb, right? The late eighteenth/early nineteenth century essayist? Of course, you do. Well, Chuck and his sister Mary (yeah, that Mary Lamb) wrote a book called Tales From Shakespeare in, oh, I don't know, 1807, I think.

In 1956 Grosset & Dunlap published Favorite Tales From Shakespeare (Donald Lynch, illustrator), which was, you guess it, Charles and Mary Lamb's works "edited for modern readers by Morris Schreiber." At some point, someone calling themselves "Aunt Agnes and Uncle Gus" gave a copy of this book to a member of my family. To be honest, it was a member of my husband's family. No Gauthier would ever buy anything with the name Shakespeare on it for a gift or anything else. And to be perfectly honest, the book was given to my husband.

I now own that book. It's in beautiful shape, probably because my husband swears he never so much as cracked it open. So I thought it would be really cool to own another prose version of Shakespearean plays for children and, perhaps, to compare them.

I know. Hahahahahah. Like that will ever happen! But I'm loving owning this beautiful book.

I saw people I knew today. I met some new people. I talked with another writer who said she hasn't made any sales in quite a while, either. I did about fifty minutes to an hour of walking going back and forth across the UConn campus. And I now own a book that I'd never even heard of eight hours ago. Really, you can't ask for much better from a fair.
Posted by Gail Gauthier at 6:06 PM
Email ThisBlogThis!Share to TwitterShare to FacebookShare to Pinterest
Labels: literary events