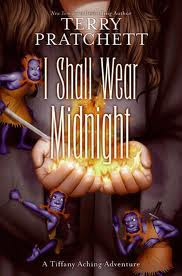 I don't usually do one reader response right after another, but yesterday I noticed that I Shall Wear Midnight by Terry Pratchett has been nominated for a Cybil, and since I'm going to be blogging about my Cybil reading over the Thanksgiving weekend, I thought I'd get something up about this book first.

I Shall Wear Midnight is the finale to the Discworld novels about Tiffany Aching who starts out as a nine-year-old in her first book and is, I believe, around fourteen or fifteen in this one. Tiffany is a witch, for sure, but in Discworld witches do a lot more than fly around on broomsticks (though they do that) and scare people. They pretty much devote their lives to traveling around their neighborhoods as a sort of one woman Visiting Nurse Association. They tend wounds, help the sick, deliver babies, all your traditional manner. Additonally they do nontraditional things like removing pain from the suffering. They can remove physical pain, but not the psychic kind that comes from, say, grief. It's not a particularly easy life, and Tiffany is young to be shouldering all this responsibility.

She has some folks watching out for her, though--a clan of six-inch high blue beings, the Nac Mac Feegle, also known as Feegles, also known as the Wee Free Men, also known as drunks, liars, brawlers, liars, and thieves. They are most endearing.

Now, I have read the first book in the series, The Wee Free Men, and I have read the third book in the series, Wintersmith. I thought I'd read the second one, but I can't find any record of it. My point being, I Shall Wear Midnight makes references to those earlier books, especially Wintersmith. I, of course, remember little about them. Even though the crisis Midnight deals with came about because of something Tiffany did in Wintersmith, not recalling it didn't really bother me. I was able to brush off what I didn't know and move on, probably in part because I've read enough Discworld books now that I know I want to be there in the world of those stories, and I'm willing to ignore anything that bothers me in order to get there.

And, of course, when there are Wee Free Men in the mix, it's easy to ignore all kinds of things.

I Shall Wear Midnight has some allegorical elements. It involves someone called the Cunning Man who appears to be the personification of evil. He is able to spread hate among people, making them turn on others. Witches, for instance. He comes, spreads his evil, is defeated for a while, and years later comes again. I think we're talking ugly mob mentality in many places, the kind of thing that has cropped up over and over again throughout history.

As a general rule, I don't care for allegory because it strikes me as being very holier than thou. However, there are Wee Free Men in this allegory. I'll put up with a lot of holier than thou for their sake.

This book includes a fascinating Author's Note in which Pratchett writes about a story from his childhood that inspired one element of this book. It's an interesting piece about how long something can sit in writers' minds before they finally are able to use it.

I've mentioned before that I've read two series this past year, one of which included eighteen or nineteen books. Maybe twenty. The author hasn't been updating her website, and I lost the sheet on which I was keeping track. I Shall Wear Midnight has a very nice list of all the Discworld books, and I'm considering reading all of them now. Perhaps I'll wait until January. Yeah. That's the ticket. I'm going to wait until January, and then start reading Discworld.

Plot Project: Yes, this plot could be one in which the protagonist wanted something--to destroy the Cunning Man--and the author kept giving her obstacles to getting it. But first the author had to come up with the Cunning Man. This is what is so simplistic about this whole give characters something they want and then throw obstacles in their way scenario. How do you come up with what they want in the first place?
Posted by Gail Gauthier at 7:03 PM
Email ThisBlogThis!Share to TwitterShare to FacebookShare to Pinterest
Labels: 2010, fantasy, Reader response, Terry Pratchett, The Wee Free Men, YA