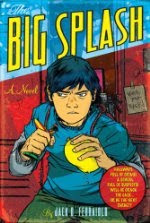 For a long time I've been interested in writing what I think of as kiddie noir--a kid-level version of the dark, hardboiled, mystery stories made popular in the 1930s by Dashiell Hammett and Raymond Chandler. Well, I don't need to feel any rush to do that because Jack D. Ferraiolo has done it with The Big Splash.

Matt Stevens is most definitely the classic, outsider noir hero with a personal code that he must adhere to. In the slightly twisted middle school world in which he lives, a young crime boss rules the cafeteria and hallways, aided by his personal bodyguards. He controls the sale of sweets in school, as well as the sale of test answers and fake hall passes. There is law at Franklin Middle School. It takes the form of hall monitors, led by one tough customer named Katie Condor. What is Matt's place in this scheme of things? He is neither criminal nor lawman, but something separate, a private detective who students hire for various tasks.

The adults at the school are pretty much invisible. The student subculture is the one kids really live in. Unless, of course, they are humiliated by being shot in the crotch with water pistols usually filled with cat urine. No one survives that. The humiliated spend the rest of their student lives in the Outs. Moving on to high school is no escape. Once in the Outs, always in the Outs.

Yes, it's an over-the-top premise but it's laid out on the page as given by first-person narrator Matt who speaks in classic noir simili. Of Joey Renoni, also known as the Hyena, Matt says on the very first two pages, "He scanned the crowd constantly as we walked, his head swiveling back and forth in a herky-jerky motion, like a lawn sprinker with the hiccups." Just a few pages later, he says of himself, "Apparently, I wore my thoughts like makeup on a little girl: all over my face." The noir style is so well done that it would be very difficult not to accept the world it describes.

The Big Splash is filled with goons and heavies and femme fatales and damselles in distress. The young women in this book are fantastic. They may wear ponytails and, in at least one case, carry binders with horse stickers pasted all over them, but they are tough and powerful. And while all the characters are clever takeoffs on their adult counterparts in adult noir stories, many of them also have some serious depth going for them, too. Nikki Fingers--there's a heart-breaking bad girl.

This is a two-year-old book that seems to have been well-reviewed when it was published, but I missed it until a local librarian bought it a few months ago. It really deserves a wide readership.

Plot Project: This is an idea/concept plot rather than a give-a-character-something-to-want-and-keep-it-from-him plot. The Big Sleep clearly provided some inspiration for The Big Splash, though it's been years since I've read it so I don't know if the plots are at all similar.
Posted by Gail Gauthier at 7:59 PM
Email ThisBlogThis!Share to TwitterShare to FacebookShare to Pinterest
Labels: 2008, mystery, Reader response