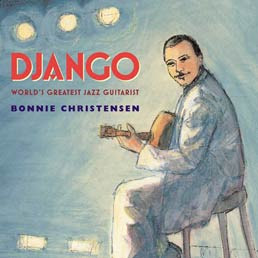 After spending some time recently with Jimi: Sounds Like a Rainbow-A Story of the Young Jimi Hendrix by Gary Golio, I was interested to stumble upon another picture book biography of a guitarist. The musician involved this time is Django (Jean) Reinhardt, a mid-twentieth century French jazz guitarist. The story of his childhood and adolescence is told in Django: World's Greatest Jazz Guitarist by Bonnie Christensen.

I think it's safe to say that Reinhardt will be even less well-known to young picture book readers than Hendrix. To today's young readers, I think Hendrix's story will seem the more traditional, because while he was an innovative rock guitarist as an adult, his youth, as portrayed in Jimi: Sounds Like a Rainbow, is the familiar poor child follows his bliss and becomes successful.

Reinhardt's story involves a poor child who goes the bliss route and becomes successful, too. But it will be more exotic to U.S. readers because instead of being born into a poor black family, a very American scenario, he was born into a poor Roma family, something we don't hear so much about in this country. He was already making a name for himself as a jazz musician when, at the age of eighteen, he was so badly burned in a caravan fire, particularly his left hand, that the doctors didn't believe he'd be able to play the guitar again. But within a couple of years, he'd found a way to compensate and play using primarily just two fingers for the fretwork.

This is the basic story in Django. Got some drama there, eh? The author's note at the back of the book picks up on the rest of his life. This guy was in England when WWII broke out and went back to Paris for the duration. I've got to wonder if there wasn't a story there, too, because Hitler sure wasn't a friend of the Roma. Christensen says the Nazis may have killed close to one and a half million of them. How did Reinhardt manage?

Like Jimi: Sounds Like a Rainbow, this is a book that could be used for a number of things, combined with both music and history.

In Memory of the Genius Django Reinhardt is a YouTube tribute that provides both images and music.
Posted by Gail Gauthier at 6:29 PM
Email ThisBlogThis!Share to TwitterShare to FacebookShare to Pinterest
Labels: 2009, nonfiction, Picture books, Reader response