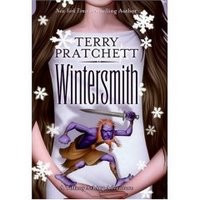 Variations on the Persephone story have been popular this year, if you consider two books dealing with it popularity. (Perhaps we're talking about the beginning of a genre here?) The Shadow Thieves is about contemporary children who learn that Hades and Persephone are for real.

The world of Wintersmith by Terry Pratchett doesn't include Greek mythology, so the reference to the myth isn't as obvious. But the annual courtship between the elemental forces of Winter and Summer takes an unexpected and dangerous turn when Wintersmith becomes smitten with a human girl and wants to make her his bride in a winterworld. Seemed like a Persephone story to me, if only in the sense that the relationship between Winter and Summer explains the changing of the seasons just as the story of Persephone and Hades does.

The idea of story is important in Wintersmith. Some stories, such as the one about Winter and Summer, are eternal, and once the story starts, it has to be completed.

Boffo is also important. Boffo is the power you get when people believe you to be powerful. I'm not good with Boffo. I definitely would like more Boffo.

Many people think of sophisticated teen books as books with sex, death, depression, and more sex. Maybe some shopping. Personally, I think sophistication involves some thinking about things we don't usually think about. Most of us think about sex, death, depression, more sex, and shopping all the time. But the impact stories have on our lives and how people achieve power? Not so much.

Some other good points about Wintersmith:

It's the third in a series of books about a young witch named Tiffany Aching. I haven't read the first two, and though it was obvious that these characters had existed before the events in this book, I had no trouble following this particular story. A book in a series that can be read on its own always gets high points from me.

Tiffany is thirteen years old. Many characters in children's books are twelve or thirteen, and the things they do seem somewhat unbelievable in relation to their age. Pratchett does a good job with Tiffany. She seems young, but in the context of her world the things she is able to do are believable.

I'm glad that you enjoyed reading Wintersmith without reading the first two books - I highly recommend A Hat Full of Sky, which I feel is the best book of the series so far (there's one more book to come, so Terry says...)