It's About The Kids, Stupid. Or Is It? 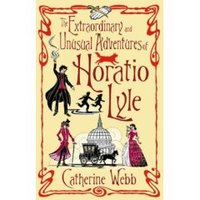 Horatio Lyle in The Extraordinary and Unusual Adventures of Horatio Lyle by Catherine Webb is one of those laid-back, cool, outsider guys you sometimes find in historical fiction. And he's an adult, the main character in a children's book.

And, yet, Horatio Lyle is there, in his book, with two child sidekicks, one of whom is very funny and clever, while the other is better than okay. For those of us who enjoy history, the book is quite good, certainly very readable. And for the scifi/fantasy crowd we've got some alien bad guys and a lot of electro-magnetic science stuff.

But how can an adult lead work in a children's book? Who will the children relate to, who will they identify with? The sidekicks? Who wants to be a sidekick?

I think the reason Horatio works is that he's an outsider in his time. He's a serious science wonk in Victorian England. A second generation science wonk, in fact. He's not an aristocrat in a society where birth status still matters. But it's also a society where education and technology are just beginning to come into play. He's even an outsider as far as traditional heroes are concerned. He doesn't use guns or swords or even his fists. He uses chemicals as his weapons. He does what he has to do, but he doesn't seem to be burdened with an overabundance of courage. When he needs help, he calls on his mother.

Why can an outsider guy like Lyle work in a children's book? Because in a world where adults have all the power, children and teenagers are outsiders, too. An outsider character--especially if he's clever and witty--is someone an outsider reader can identify with.
Posted by Gail Gauthier at 7:17 PM
Email ThisBlogThis!Share to TwitterShare to FacebookShare to Pinterest

Good review! Bit, I do disagree with the part about having main characters as children in chilren's books. Didn't we all love those old Disney movies? Snow White and such weren't chilren. But I do see the point trying to be made and the review is very good.