This past weekend I happened to read two books about heroic main characters. They each illustrate a problem writers have to deal with. 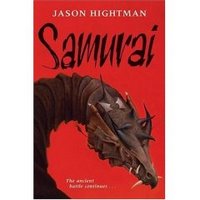 The basic premise behind Samurai by Jason Hightman is that St. George, of St. George and the Dragon fame, has descendants who continue to fight dragons. Contemporary dragons feed off from human suffering and, disguised as, say, high fashion models or plastic surgeons, they cause a lot of. Simon St. George and his father Aldric, the last of St. George's descendants, can see them in their real form and have committed their lives to destroying them. In Samurai, the second in a series about the St. George's, they learn that a group of Samurai warriors battle dragons in Japan and the two groups end up joining forces.

Hightman has said that he "hopes the Saint of Dragons series combines the best elements of old-fashioned swordplay adventure, Japanese comic books, cinematic action, heroic archetypes, and unusual villains." Certainly, Samurai involved a lot of action. It was almost exhausting reading it, by which I do not mean it put me to sleep by any means. I thought the climax got a little out of control and over the top, the way action films sometimes do, but certainly there's an audience for this book.

Here's the problem Hightman faces, though--it's really hard to pull off a teenage hero surrounded by adult heroes who are older and stronger and more experienced. Poor Simon has trouble holding up his end. This is realistic, of course, but it's still a difficult situation for a writer to have to deal with. Simon also does some stupid things, as so many kid characters have in the past. This moves the story along, of course, because it means he can get in trouble. But how heroic is it?

Heroic teen heroes--not easy to do.

Rick Riordan faces another problem with The Sea of Monsters, the second in the Percy Jackson and the Olympians series. (Blogger refuses to let me upload the cover.) We learned of the clever setup for these stories in the first book The Lightning Thief. Greek gods are for real, they're still consorting with humans and producing god/human hybrids who are being gathered together at a special camp for heroes. Riordan avoids the pitfall of putting a teen hero up against adult heroes by not using any adult heroes. The problem he's facing, though, is that in the second book we know the setup, and it's just not the same as when we were first exposed in the earlier book.

This happens frequently with series stories. Eugenides from the books by Megan Whalen Turner has a cult following. I love him, too. But I don't love him quite so much as I did in The Thief, when I didn't know who he was. Now I do. You can't go back. And Twilight the first in the vampire series by Stephanie Meyer stands out because of the sexual tension between its two main characters. Talk about something that's hard to maintain! Especially since doing something about the tension requires a self-destructive act on the part of one of said characters. Meyers is really in a bind.

Well, traditionally heroes always have a tragic flaw, so we shouldn't be surprised when teen heroes have one, too.
Posted by Gail Gauthier at 12:47 PM
Email ThisBlogThis!Share to TwitterShare to FacebookShare to Pinterest