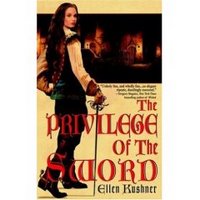 Many people who aren't familiar with YA fiction believe that it contains little if any sex. That is so not true. Sexual content definitely is not a reason to write off a book as being inappropriate for teenagers.

Nonetheless, when a novel hasn't been written specifically for that audience, when the author believed she was writing a book for adults and the publisher prepared and marketed that book for and to adults, I do think it is only responsible to bring up sexual content. Adults ordering the book for a younger audience should be aware of what the book is about. And I definitely feel it does authors of adult books an injustice to have others just blithely announce that their work is YA friendly, leaving them open to challenges they should not have to endure because, after all, they were writing for adults.

The Privilege of the Sword by Ellen Kushner is an adult book that has been nominated for a Cybil award. Though the sexual content is not graphic by any means, the book does include many promiscious bi-sexual characters, a heterosexual rape, discussion of very young boys being used sexually by men, and a brothel scene. That's what I can remember. Oh, wait. There's a brief sexual awakening moment, too, that occurs while a character is watching two women kiss.

I mention all that just so you know.

The book is YA friendly in that it has an attractive teenage main character and a number of other teenage characters as well. Someone could make the argument that the book deals, at least in part, with a traditional YA theme of identity. Young Lady Katharine is a member of country family that is at the financial mercy of her uncle, a duke. He offers to repair their financial problems if she comes to live with him and learn to be his swordsman. She evolves into a much different person by the end of the book.

The Privilege of the Sword is very intriguing, especially if you spent part of your youth reading historical romances. The fantasy element of the book involves the setting, which appears much like, say, late-eighteenth century England, but isn't. But many of traditional aspects of Georgette Heyer-type romances appear here. They're just--different.

For instance, a decadent hero often appears in historical romances. He's a combination bad boy, anti-hero, someone who clearly was getting around the track in his youth but is now some kind of outsider power figure who recognizes and falls for the spunky young heroine's...ah, spunk. Alec Campion, Duke Tremontaine, fills this position in The Privilege of the Sword, except that he's decadent now. In spades. In addition to engaging in promiscuous sex with members of both sexes, he's often drunk, and he does drugs. But he's also a wealthy patron, when he thinks of it, supporting social outcasts.

He's also the spunky heroine's uncle, taking him out of the running for her romantic attachment. (He's not that decadent.)

Historical romances often have wealthy young girls who are taking part in their "Season" during which they are essentially on the meat market, looking for suitable husbands. We have a meat market in this book as well as one particular girl's disasterous experience as part of it.

We have lots of women experiencing disaster in this book. A young girl is taken advantage of by her powerful fiance and left twisting in the wind by her family. Another is a physically abused wife. A third doesn't fit the mold for beauty and form but is academically gifted, meaning there's no place for her in this society.

All these women need the protection of men, as is usually the case in a historical romance. In this particular romance, though, the decadent, perhaps mad, Duke Tremontaine recognizes that the best way to protect a young female family member is to give her power.

How will younger readers feel about this book? I really have no idea. I don't know who's reading historical romance these days or if the fantasy element here is strong enough to make young readers feel they're reading a fantasy. I don't know if young women will feel there's a feminist twist to the book the way I did.

The novel definitely has a lot of interesting elements. I just think we need to be up front that sex is one of them.
Posted by Gail Gauthier at 11:03 AM
Email ThisBlogThis!Share to TwitterShare to FacebookShare to Pinterest

I'd be happy if this one won an Alex this year. I loved it so much I was gushing for at least a week.

There is lots and lots of sex, though. (But I didn't find it nearly as graphic as some scenes found in actual YA books.)

There was very little obscenity, either.

I didn't start really getting into the book until the halfway point. I think part of my problem was that I kept trying to pin down what was happening with the fantasy. And there wasn't much happening with that. Once I gave up worrying about that and recognized the twisting around of historical romance elements, I liked it a lot more.

I believe the author has another book set in the Riverside area of "the City" about the Duke and St. Vier when they were young. I'll look for it when I have time in a few months.

I actually ILLed Swordspoint immediately after finishing this one -- but it hasn't come in yet.