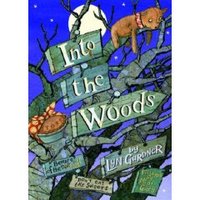 I can recall enjoying the fairy and folk tales that appeared in my pastel reading books when I was a little nipper, but I seemed to grow out of them pretty rapidly. I suspect I became jaded from too much exposure to the fractured fairy tales of the Rocky and Bullwinkle Show.

So I wasn't able to appreciate Into the Woods by Lyn Gardner as much as it probably deserves. Even so, I was able to recognize all kinds of clever twists and turns and variations on tales in this story of a latter day pied piper. There are references to a woodcutter's daughter who went into the woods and was eaten by a wolf as well as to a child who trespassed in someone's home and ran into some really rough characters. A gingerbread house figures prominently in the storyline. In fact, a knowledgeable reader can have a pretty good time picking out details from childhood stories. There were probably far more story references there than I, myself, recognized.

I found the bad guys too stereotypically nasty for my taste, but for people who are more into fairy tales, that may be part of the fun.

One aspect of Into the Woods I particularly liked, though, was the questioning of happilyeverafter endings. The main character and her two sisters are the daughters of Rapunzel, who, after she is released from the tower and falls in love, turns into one really lazy mom. And at the end of Into the Woods, our heroine, herself, suffers from heroic letdown.
Posted by Gail Gauthier at 1:40 PM
Email ThisBlogThis!Share to TwitterShare to FacebookShare to Pinterest

The game has a lot of rf gold, as long as you join to play this game you will get
them. you should try your best to earn as much rf online gold as you can, so you are strong and no one can
fight you. you can get a lot of rf money in the game, so many other players want to play with you together. As long as you have the rf cp you will be strong and you can go to kill the monsters to upgrade alone. i like the cheap rf gold very much.