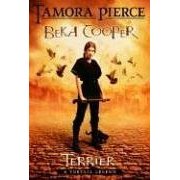 I'm getting the impression from some things I'm now reading that Beka Cooper: Terrier by Tamora Pierce may be part of some overall fantasy world created by Pierce. The bottom of the cover does include the line "A Tortall Legend."

Not only do I not know what the heck Tortall is, before Beka Cooper I had never read anything by Pierce. Not a word. That did not hinder my enjoyment of this book.

But then Beka Cooper isn't what I think of as a traditional otherworldly fantasy with a made-up country, a made-up religious hierarchy, and a made-up culture. Well, actually, it is all that. But it's also a police procedural. A really good one.

Beka Cooper is a sixteen-year-old newbie police officer, known as a puppy. (The experienced officers are dogs. It's a lot less cute than it sounds.) She happens to have a little bit of magical mumbo jumbo about her, though not everyone in the city where she works does. Magic is accepted, people just don't get all mystical and freaky about it. She's been assigned to two experienced, competent officers who are responsible for her training.

Beka has a great voice, very distinct from the traditional YA voice in mainstream YA fiction. She has witty, tough, believable partners. She has no real love interest. She has a couple of heinous crimes to solve. She solves them.

Whatever alternate world she may be part of doesn't become burdensome or distracting. It does what it should do. It supports the story.

Pierce provides a multiple page glossary of sorts at the back of the book. She does such a good job with her story that it just isn't necessary.

One of the things I particularly liked about this book was the portrayal of the poor. Often fantasy books seem to love royal or artistocratic characters--fairy queens, royalty in disguise, knights in shining armor, and on and on and on. But Beka Cooper and her companions rise from the poorest section of the city and stay there to protect others like themselves.
Posted by Gail Gauthier at 6:58 PM
Email ThisBlogThis!Share to TwitterShare to FacebookShare to Pinterest