You Don't Suppose This One Went Just A Little Over The Top? 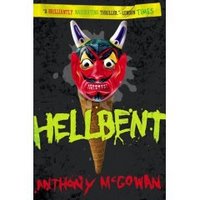 "A brilliantly nauseating thriller." London Times is the blurb scrolled across the top of the cover of Hellbent by Anthony McGowan.

Believe it. Believe every word.

Sixteen-year-old Conor O'Neil buys the farm in the first chapter of Hellbent and goes straight to Hell. Conor is an extremely likable (to me, anyway)character, one of those I call self-aware rather than self-involved. This is no Holden Caulfield wannabe whiner, though God knows he has plenty to whine about, being in Hell and all.

The problem with Hell--and with Hellbent--is that it's full of crap. I am not speaking metophorically, people. I mean that everywhere you look in McGowan's hell, you find excrement. If Conor has to go across a lake, it is filled with dung. If he goes out to eat, he's served a plate of poo. If he has to go through a culvert, the fluid flowing through the bottom of it is filled with floating turds. If he...you get my drift.

You know how a well-placed obscenity can be funny because it's shocking? But after you've heard the same dirty word thirty to fifty times you're no longer shocked? In fact, you're bored? That, unfortunately, is what happens in Hellbent.

Really, there should be a rule limiting writers to one roughage joke per book.

Everyone gets their own personal torment in this Hell, which isn't a particularly novel idea, but that's okay because McGowan does some clever things with it. Conor's torment is to be confined in a room with books on philosophy, history, and religion as well as a radio that gets only one station. It plays, of course, only classical music of every stripe when it isn't running documentaries on such topics as "James Joyce's use of the apostrophe." Conor realizes that some other tortured soul is confined to a room filled with just the kind of things that would be heaven to him, and he sets out to try to find it in the company of the devil assigned to him.

The toilet humor is interspersed with philosophy, believe it or not, which is very interesting. Imagine swinging from a scene about a butt-nipping creature lunging up out of a toilet bowl to one in which two characters discuss how to live a good life. Conor's devil companion tells him how to do it, but I realized after I'd slept on it that since that devil was a known liar, we probably can discount any advice he has to give.

Hellbent is witty and thought provoking. I liked the ending. However, as I was wading through page after page of...well, you know...I was wondering what was the point of the over-the-top and pretty revolting fecal humor. Was it there to make the philosophical points more palatable to teenage boys? If so, I think that if the author had cranked down the intensity a bit, he would have achieved the same result and kept a lot more readers over the age of seventeen as well.
Posted by Gail Gauthier at 5:21 PM
Email ThisBlogThis!Share to TwitterShare to FacebookShare to Pinterest

Thanks for your amusing and perceptive review of my first teenage novel, Hellbent. You're quite right that there is a lot of s***t in my book, perhaps too much. You're also right in thinking all the toilet stuff was a way of dragging teenage boys into a book that is, in fact, pretty demanding in terms of the linguistic and intellectual content. But I'd say I'm also writing as part of a long literary tradition - almost all of the vilest references are taken out of Dante, Rabelais or Shakespeare - and I'm not trying to put myself in the same category as those great writers, only to say that earthy humour, bodily comedy and good literature are not mutually exclusive.

But I genuinely did enjoy your review. hellbent has sunk without a trace in the US, and it's nice to know that someone has actually read it! My second teenage book, Henry Tumour, has just won a prize in the UK, and FGS are going to bring it out in the US. It's much less toilety that Hellbent, but still pretty rude.

I did wonder if there was some Dante action going on, but my knowledge of The Inferno is pretty limited.

I have to admit I enjoy a certain amount of rudeness. I was doubled up laughing over the extended and quite elegantly done fart joke at the beginning of the book. I'll be looking for Henry Tumour.