How Can We Talk About This?

No, I'm not talking about sex, death, or religion. I'm talking about what I may start referring to as episodic literature, books that may not be able to stand alone because they are part of a serialized series.

I have gone on record as saying that I believe every book should be a complete world, a complete experience. I've also tried to explain that I think writing is a form of communication and that the world the author envisions is what she is trying to communicate to her readers.

However, I try to maintain a mind of a beginner, not closed because of all the things I think I know. So my Cybils colleagues have been able to open me up to the idea that a complete world, a complete experience, can be extended over several books as in the case of a serial, a series of books that lead from one to another.

Even though I can now agree with this concept--or at least accept it--I'm still at a loss at how to discuss or assess later books in such series. 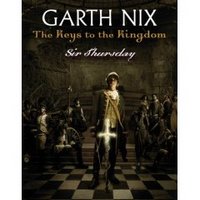 Take Sir Thursday by Garth Nix, for instance. Sir Thursday is the fourth book in Nix's Keys to the Kingdom serial. If Sir Thursday is any indication, the Kingdom involves a very complex world filled with unique characters. Even though there were some interesting things going on in this book, it was very difficult for this reader to figure out what was happening in the early stages. And though there is a climax for the action in this particular episode, the book definitely doesn't have a resolution. Instead, it ends with what appears to be the beginning of the next episode.

The complete serial, I'm told, is wonderful. But it's difficult to get into it by way of Sir Thursday.

Sad to say, you rarely find a nearly perfect balance of character, plot, situation, voice, and just about everything. But they're all there in equal proportions in Ptolemy's Gate by Jonathan Stroud. Ptolemy's Gate is the third in a trilogy, and yet, while I was aware that these characters have a history, I had no problem at all picking up and running with this story. In fact, I think the frequent point-of-view switches were more demanding than not knowing anything about the earlier books.

So, what does a reader of these books tell another reader about them? How do adults encourage children to pick them up? I find it hard to believe readers who aren't already Keys to the Kingdom fans will make much of Sir Thursday. Why write a book that won't attract readers of its own? Ptolemy's Gate is just wonderful and should send readers back to the earlier books. Or maybe it won't because they'll know how the long-term story ends.

Who should read these books? Only people who've read the earlier ones? Are they written just for that subset of readers?

Well, I was discussing this at dinner last night (wouldn't you just love to eat at my house?) with two family members who are readers of serial fiction. One of them had an interesting view of this matter.

His thought is that every time a new book is published in a serial, the "hoopla" involved doesn't just publicize that new book but all the books that came before it. Thus when a new Keys to the Kingdom comes out, interest rises in the earlier books. And raves for Ptolemy's Gate don't just affect sales of Ptolemy's Gate but of the entire Bartimaeus Trilogy.

So the fact that the new book may not be a stand alone and may not be accessible to new readers isn't that big a deal because the new book isn't just a new book. It's also a marketing tool for the entire serial.

In fact, you've got a bizarre back-and-forth or maybe circular thing going on here. Fans of the first book are built-in buyers for the later books. If sales were good for the earlier books, you know you've got an immediate market for the next ones. Then the publicity for the later books will publicize the older books--and older books usually don't get much publicity on their own.

So, I guess what all this means is that because I've discussed Sir Thursday here, I've promoted Keys to the Kingdom. And because I've given a big thumbs up to Ptolemy's Gate, I've thrown some promotion to the Bartimaeus Trilogy.
Posted by Gail Gauthier at 6:17 PM
Email ThisBlogThis!Share to TwitterShare to FacebookShare to Pinterest

Bingo! You've got it! Woohoo! You've got some smart family members, there. And yes, I would like to eat dinner at your house; it sounds like fun! (Not that I'm inviting myself, you understand!)

This is exactly why publishers love series and are keen to sign authors up to write a trilogy or longer series - it not only earns them (and eventually the author) money on the new book, but also money on the preceding books as new readers come to the series and buy up the previoud titles...

I do still find it difficult to get my head around how to assess individual books in a series, though. Do reviewing journals assign particular series to a particular reviewer who then reviews all the episodes in that series?

And what if book 4 reeks? Do we then revise our impression of the whole series? Does it have an impact on the earlier books?

No, I don't. I can't say I'm terribly fond of The Golem's Eye, book 2 of the Bartimaeus trilogy - but I think book 3, Ptolemy's Gate, more than makes up for the second book...