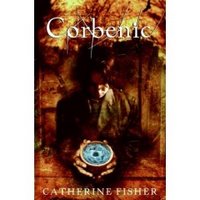 I first heard of Catherine Fisher last spring while I was still active with the YA Forum at Readerville. Some of the other posters were fans. Corbenic is the first of her books that I've read.

The tension in the opening pages of Corbenic is almost unbearable--in the good sense of the word. Cal, the seventeen-year-old main character, is on a train, escaping a hellish childhood. He's leaving his mother, who we don't know much about at that point, to go stay with his uncle, who we don't know much about either. He accidentally (and believably) gets off the train at the wrong stop. It appears to be out in the middle of nowhere. There's no station, no board up with a schedule, nothing. He wanders around desperately in the rain and the dark until he meets a couple of fishermen who direct him to an inn.

This is not so much an inn as a beautiful old castle where he is treated royally. But while there he makes a mistake. As a result, when he wakes up the next morning, he is no longer in a castle but a ruin.

Cal is a marvelously conflicted character, desperate to get away from his mentally unbalanced and alchoholic mother yet also filled with guilt for wanting to do so.

Is Corbenic, the castle he stumbled upon real? Or is it a symptom that, like his mother, he's going to become mad?

Corbenic is a new take on Parzival the story of Percival, one of the knights of the Round Table. Each chapter in Corbenic begins with a quotation from what appears to be one version or another of the Parzival story. Knowledge of the original definitely isn't a requirement for enjoying Corbenic. Though I used to be an Arthurian groupy and am familiar with names and the Holy Grail, I didn't know anything about Parzival.

Corbenic is a well-written, atmospheric story in which Fisher does a wonderful job of combining the old and the new. Ruth Rendell is a writer I don't imagine many young adult readers will know much about, but Corbenic's psychological tension and realistic turmoil suffered by an average human being reminded me very much of her work.
Posted by Gail Gauthier at 5:35 PM
Email ThisBlogThis!Share to TwitterShare to FacebookShare to Pinterest

Interestingly, Corbenic was also the first of Catherine Fisher's books that I read. I spotted it in the book section of a charity shop and the atmospheric black (British) cover caught my eye. One book that I'm very glad I randomly bought !

You're invited to add a link to your review at my Saturday Review of Books at www.semicolonblog.com. The book, and the author, sound interesting.

Thanks. What a neat way to do a review roundup.

And thanks for the Happy Kid! review. I saw it a couple of days ago.

I am the one who nominated Corbenic for the Cybills - I loved it when I reviewed it for Bookslut in September. It's such a different take on the whole "heroic challenge" idea. Certainly one of my favorite books of the year.

I am the one who nominated Corbenic for the Cybills - I loved it when I reviewed it for Bookslut in September. It's such a different take on the whole "heroic challenge" idea. Certainly one of my favorite books of the year.