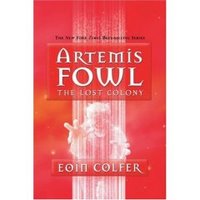 I am a fan of the early books in the Artemis Fowl series by Eoin Colfer. However, I found, the fourth book, The Opal Deception, disappointing--kind of murky and pointless.

But the fifth book,The Lost Colony, is out now, and it's a definite improvement. It took around 30 pages to clean up the mess that was left by the fourth book. After a character died for no good reason in The Opal Deception, Captain Holly Short left her job with the Lower Elements Police force and in this book had to be attached to another law enforcement organization to get the plot going.

But it does get going.

All the Artemis Fowl books are about a child criminal mastermind who interacts with elves, gnomes, centaurs--all those sorts--who live in a technologically advanced culture under the Earth's surface. That's the joke behind the stories--a brilliant (and sophisticated) child criminal and pixies who, while magical, are not huddling under toadstools and yearning to interact with humans. Colfer has called these books Die Hard with fairies. We're not taking about achieving peace here or teaching the world to sing. We're talking about a fun action fli...novel.

Even before going astray with The Opal Deception, the series was losing steam. This was due to the fact that young Artemis, who was wonderfully self-centered and obsessed at the beginning of the series, was gradually becoming a bit of a do-gooder. I can understand why this was happening. Colfer found himself in a bit of a bind. It was hard to keep his wonderful bad boy bad without making him, eventually, unsympathetic. Yet as Artemis became good, he lost his flare. Everyone loves a bad boy. Good boys...not so much. They make good husbands, but who wants to read about them?

One of the things Colfer does in The Lost Colony is bring us back to the fun of the child criminal. I won't say how, but it does bring some needed juice back to the series.

By the way, Butler is just wonderful.
Posted by Gail Gauthier at 5:48 PM
Email ThisBlogThis!Share to TwitterShare to FacebookShare to Pinterest

How I love Butler. The Entling's birthday is tomorrow and this book is wrapped and ready. Once she reads it, I get it!