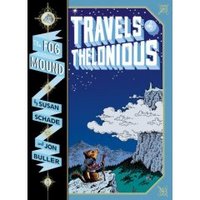 Travels of Thelonious by Susan Schade and Jon Buller is a lovely book. It's heavily illustrated in comic-type pictures in various shades of blue and periodically breaks into a graphic novel format for several pages at a time. It's definitely an inviting book.

Our story begins with a line from an old legend. "In ancient times, when human beings ruled the earth and the animals did not yet have the gift of language..."

That explains the basic set up of the world of Thelonious. Humans no longer rule the earth and animals speak. What brought about this sequence of events, you may wonder. No one knows. Some animals don't even believe that human beings are real. "The Human Occupation is just a myth."

Thelonious finds out differently when the tree he lives in is washed away in a storm with him in it. He finds himself in ruined human city. And from there he begins his travels.

This is a very linear story, with various animals trying to return to their homes. Though we're talking about some kind of post-disaster society, the creatures and their families are warm, fuzzy, and comforting. (And I'm not being sarcastic. Really.) In fact, there are some scenes involving a bear family that seem very much like The Berenstain Bears in A Brave New World. (Again, I'm not being sarcastic. Some members of the Gauthier family adored The Berenstain Bears. Big comfort books.)

Thelonious is marketed to 8 to 12 year olds, but with the animal characters and wealth of illustrations, I think kids toward the lower end of the age group are going to be more interested. I also think it could be a good choice for reluctant or new readers who will be encouraged by the pictures and the story line that will pull them along. And since it's the first in a series, if they get hooked, they'll be able to keep reading.

I just found out today that Jon Buller (who did the illustrations) and I were at the same conference at the beginning of November. I hadn't heard of him or his book at that time, which is probably just as well. As a Cybils judge, I probably shouldn't be consorting with nominees.
Posted by Gail Gauthier at 7:38 PM
Email ThisBlogThis!Share to TwitterShare to FacebookShare to Pinterest