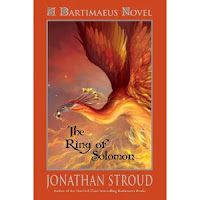 Almost immediately after learning that Bartimaeus was back in a prequel to The Bartimaeus Trilogy, I stumbled upon said book, The Ring of Solomon, in my local library. Yes, I often feel embarrassed being beating out all the YAs in town to be the first to read a new YA title. I just don't feel embarrassed enough to stop doing it.

In The Ring of Solomon by Jonathan Stroud we see Bartimaeus, a reluctant, sarcastic, hysterically funny djinni, in an adventure that takes place well before the time of The Bartimaeus Trilogy. That series took place in an alternate contemporary England. Bartimaeus, however, has been around for a couple of thousand years. The Ring of Solomon takes place in what I can only call an alternate Old Testament world.

In the universe of the Bartimaeus books, magicians call various spirits out of another dimension, where they appear to be quite formless and happy, and enslave them to do all kinds of things for them. These spirits can take any form, flipping from demonic to human and everything in between. Bartimaeus takes different forms, but he is always the same character, whether he's in the shape of a handsome young Summerian male or something with a tail and maybe horns.

The set up in this book involves King Solomon, who has a ring that controls an incredibly powerful spirit. His kingdom of Jerusalem is filled with powerful magicians, all with an eye on the ring. Solomon, who only has 700 wives, has an eye on the Queen of Sheba. Through some political skulduggery, the Queen learns that Solomon is going to attack her kingdom. The Queens of Sheba surround themselves with female heriditary guards. This queen sends a young guard named Asmira to assasinate Solomon and steal the ring. Asmira runs into Bartimaeus who has been enslaved by one of Solomon's more evil magicians.

Stroud sometimes writes from the point of view of characters other than Bartimaeus. These sections are clearly marked and written in the third person, while Bartimaeus's sections are in the first person. Sometimes we see Bartimaeus from these other characters' points of view (particularly Asmira's), sometimes we're just getting story. There's nothing wrong with this, but, loving Bartimaeus, as I do, I miss him when he's not on center stage. And I'm going to do a bit of nitpicking here and say that we also get some anachronisms from Bart. For instance, at one point he wishes he had some popcorn while watching some disasterous scene. It's funny, but out of place. He's not traveling back and forth in time; he hasn't brought knowledge of popcorn back from the future. He hasn't gotten to popcorn times yet. Okay, maybe they did have popcorn in 950 B.C.E., but someone's going to have to prove to me that they had a tradition of chowing down on it while watching entertainment.

But what are a few minor anachronisms, right?

While I was reading The Ring of Solomon, I kept wishing I was still teaching Sunday school. Hey, wouldn't reading this book be an enriching activity for some religion class studying the Old Testament! (Not that I recall covering the Queen of Sheba's encounter with Solomon. In my experience, Christian education texts tend to focus on Solomon's wisdom, not his way with the ladies.) I also kept looking at the picture of Jonathan Stroud at the back of the book and thinking, This guy looks so serious. Yeah, he looks as if he ought to be teaching Sunday school and not making jokes about elephants breaking wind.

I hope The Ring of Solomon means we're going to be seeing more of Bartimaeus. I wouldn't mind seeing him with Asmira again, too. She seems to be his kind of woman.

Plot Project: My guess is that once Stroud came up with the idea of mixing Bartimaeus with King Solomon and the Queen of Sheba, he didn't have to worry much about what he was going to do for a plot. I think the plot must have grown from there, rather than giving Bartimaeus something to want and then coming up with ways to keep him from getting it.
Posted by Gail Gauthier at 7:26 PM
Email ThisBlogThis!Share to TwitterShare to FacebookShare to Pinterest
Labels: 2010, fantasy, Reader response, YA