I Shouldn't Have Tried To Guess What This Girl Is About 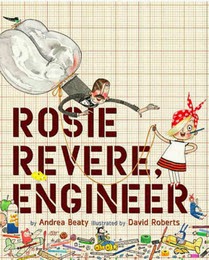 Early on in Rosie Revere, Engineer by Andrea Beaty with illustrations by David Roberts, young Rosie creates something that fails. And she feels bad about it. And I thought, Oh, this is going to be a girl self-esteem book. While this late twentieth century feminist is all for young girls having good self-esteem, I've read about it before.

But I was  wrong. This isn't a girl self-esteem book. This is an importance of failure book. There's something I haven't seen a lot of. The main character is a female because the main character had to be something. She could have been a genderless anthropomorphic bear, that's how little sex roles have to do with this story.

Rosie Revere deals specifically with the value of failure in engineering. In many such tech fields, failure brings practitioners closer to reaching their goals because it narrows the field of things to try. I think you could argue that failure is an important part of many fields. I could also do an old coot rant about how our educational system values artificial success (A's! Check pluses!) over the reality of work. Hey, but I'm not going to get all wound up.

How important is the basic premise of Rosie Revere, Engineer? According to the engineer I eat with most nights and twice on Sundays, failure was how those people worked a century or two ago. Those were the days before engineers had adequate knowledge of properties of materials, and may not have had much in the way of materials, for that matter. So if they built a bridge and it failed, they built another, differently. No, it doesn't sound very efficient or economical and wouldn't have made a great movie. Progress is a very fine thing, isn't it? No one would want a bridge to go down during rush hour just because failure is how you move forward toward success.

Nonetheless, failure before you get to the bridge point, in the early invention period that Rosie Revere, Engineer deals with, is another thing. Accepting failure and understanding its uses is an old idea that's due for a comeback.
Posted by Gail Gauthier at 9:39 PM
Email ThisBlogThis!Share to TwitterShare to FacebookShare to Pinterest
Labels: 2013, Picture books, Reader response

I've been making a quiet list about books with failure in them - I have a very perfectionist seven-year-old nephew who wouldn't write his name for awhile because he didn't make the lines for the e's exactly all straight. There was much weeping/gnashing and my sister held him out of Kindergarten a year because it all overwhelmed him SO MUCH.

He played a lot of video games as a wee (too many, auntie thinks) and there's always another "life" and a do-over, and I think that messed with his head. FAILURE is where it's AT. It's how you learn to keep TRYING. If we want him to be anything which requires more than a single step of thinking - i.e., something more fulfilling than a grocery bagger - he's got to come to grips with this.

Not that it's not okay if he wants to work at Raley's. Just... he should have options, at seven...

I think we should value process more than we do, too. Process over the ultimate prize. The idea that anyone who doesn't take first place loses is not just anti- warm and fuzzy. It's dangerous, because it discounts all the premiere competitors in all kinds of fields who have learned the process and are now in a position to go forth and design/discover something that will do a whole lot more than win a blue ribbon or a gold medal.