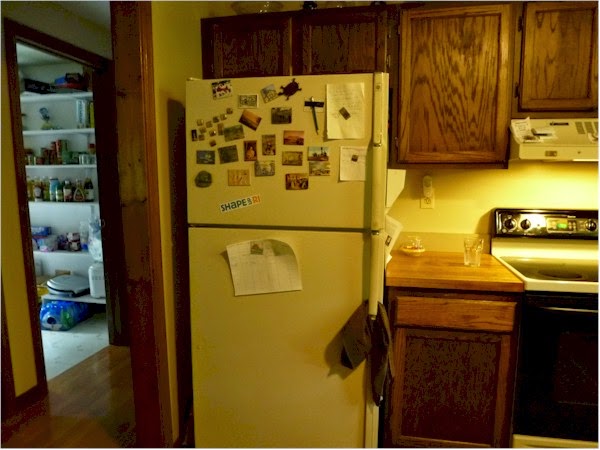 A couple of weeks ago, Facebook Friend Jeannine Atkins posted that she was getting ready to tack items on a character's refrigerator in a work-in-progress. I thought, Wow! Why don't I post items from one of my works-in-progress on my refrigerator? It would help keep me in the WIP's world

I suggested in Jeannine's comments that we do that. Someone pointed out that first we'd have to clean off our refrigerators, which is definitely the case. 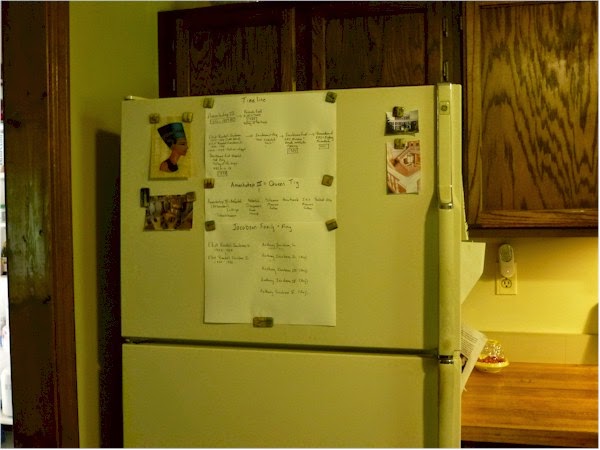 As you can see in the above picture, I've overdone it a bit with the art magnets. They're now crammed onto the side of the fridge.

Look to the left, and you'll see what I replaced those magnets with--material related to my mummyish book.  I have a timeline for my somewhat real historical figure, Nebetah, daughter of Amenhotep III, leading to my made up nineteenth century Egyptologist family leading to the museum they funded in the 1920s leading to my present day story. I have family trees for the pharaoh's family and for the Egyptologist's. I have a picture of the statue of Amenhotep, Queen Tiye, and their daughters, the only one in which Nebetah appears. I have pictures of the university museum that I'm using as a model for the Elliot Randall Gardner museum.

You might recognize a picture of Nefrititi. She appears to have been Amenhotep's daughter-in-law, which would have made her the sister-in-law of my sort-of mummy, Nebetah.

I haven't worked on this project in weeks while I've been taking care of smaller works. We'll see if having these details in my face every day helps me get back to it faster.

I suggested to a family member that my fridge story panel was similar to a Pinterest board, except that being on my fridge, I would actually look at it. He thought it was more like one of those Major Crimes case boards.

This is fantastic. It's got to make you want to get back to it. It makes me want to write your novel, and I know nothing about it.

And I was the one who noted it would mean cleaning off the refrigerator. I feel like a slacker now, but I'm sticking with it. Maybe if I had mummies in my book I'd be more inspired to put them in the kitchen. P.S. Love the word mummyish.

I feel putting "ish" acts as some kind of modifier when placed on the end of any noun.