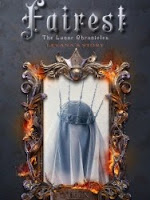 Fairest: Levana’s Story by Marissa Meyer is part of her Lunar Chronicles series, a complicated multi-volume story involving a Cinderella cyborg hot for a prince, a Red Riding Hood character who gets way too involved with the big bad wolf, and a Rapunzel computer wiz hoping for a prince. Levana is the evil queen who is the fly in the ointment of their romances. Fairest is her backstory. With it we also get the backstory of many of the other characters. Way back backstory.

I like the Lunar Chronicles. It’s an extended romance made interesting by its setting and the problems of this world, problems that extend far beyond who is going to end up with whom.  Levana’s back story is interesting for those reasons and because it’s romance gone bad.

Reading it was an interesting experience because at the beginning, I’m thinking, Come on. Levana goes nasty because she’s not pretty enough? What? She’s nasty because she isn’t loved? Isn’t that kind of clichéd and shallow?

But if you’re into this whole series, it works. All the other women in this world have been loved in their pasts, even if they weren’t aware of it because most of them have had pretty awful lives. Plus, in addition to this absence in Levana’s life, her family is pretty close to being bat shit crazy. Levana being ignored, being tormented by her sister, being unloved only goes so far in explaining her behavior. This princess was never going to be anybody’s Queen of Hearts.

One really interesting aspect of this book is Levana’s obsession for Sir Evret Hayle. It’s similar to a relationship in another recent book, Belzhar by Meg Wolitzer. Two young women with obsessions for a male, two very different results.

One more interesting point: Levana ages out of YA by the end of the book. She must be in her mid-twenties by that point. Again, in terms of the whole series, this works because we only know her as her evil adult self in the other books.
The Lunar Chronicles is another series I wish I’d waited to read until it was completed. What a binge this would have made! The last volume, Winter, comes out this fall.

Posted by Gail Gauthier at 11:30 AM
Email ThisBlogThis!Share to TwitterShare to FacebookShare to Pinterest
Labels: 2015, fantasy, Reader response, YA