I took part in National Novel Writing Month back in, I believe, 2004. I had an exciting time and began an adult book that I think about and make notes for now and then. But then I thought, Hey, Gail. You are a so-called pro fessional writer, published and all that. You should be writing like this all the time, not just in November. So I didn't do it again.

Not that pro fessional, published writers can't take part in NaNoWriMo. A couple of well known children's lit writers of my acquaintance have announced on Facebook that they're taking part this year. And NaNoWriMo has such a pull. All the other kids are doing it. And a rough draft in 30 days!

But it isn't always convenient to do a traditional NaNoWriMo project, if you've been writing all year. I know, myself, I just finished a rough draft in August. That's not an ordeal I want to repeat so soon, when I have a second draft to do and a November event I'm attending that I need to psyche myself up for.

What if you're like me, but you feel bad about not being able to partake of the National Novel Writing Month fun?

Writer Jennifer Derrick can offer you options. In her blog post NaNoWriMo for Professional Writers she describes ways to turn National Novel Writing Month "into an event that benefits your writing career." They all involve using November for what I call a "set aside time" to do some kind of intense task.

It turns out, there are many things writers can do in a month-long binge that don't involve writing a book-length rough draft. 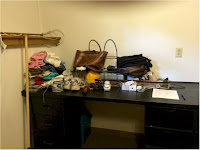 If you have been following the October Purge Chez Gauthier, here is your visual on where we stand as of today. We've got about a week and a half to go.
Posted by Gail Gauthier at 10:58 AM
Email ThisBlogThis!Share to TwitterShare to FacebookShare to Pinterest
Labels: NaNoWriMo, Purge 2015, time management for writers, Time Management Tuesday