I had a little trouble sticking to A Girl of the Limberlost while I was on vacation, because I was also reading Dust & Decay by Jonathan Maberry. It's the second book in his Rot & Ruin series. I liked the first book, Rot & Ruin, for its western genre overtones and because it's one of the few apocalyptic novels I've read in which a second generation is fed up with the status quo and wants to move on.

While Rot & Ruin was a Wild West story with a lone lawman character, Dust & Decay is more of a lost in the Badlands tale. And, once again, the zombies are not the worst things main character Benny and his crowd have to contend with. 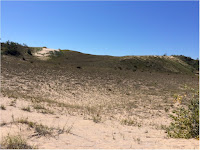 I got so into this book that while we were walking across the desert-like terrain of Dune National Lakeshore in Michigan, I kept wondering how the ol' zoms would fare there. Would that be a relatively safe place for humans? If the humans could stand it? 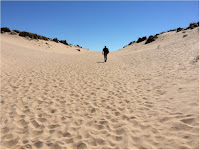 I was quite unhappy with how things turned out for one particular character who shall remain nameless. Yet, as a writer, a writer of books for young people, I think it was a very wise thing to have done.

So that was some good vacation reading. Good enough that when I got home, I picked up Flesh & Bone, Book 3. Now, Flesh & Bone would probably be considered a journey story, except that Benny and his guys are stopped dead in their tracks by post-apocalyptic religious creepies who are fighting among themselves. Our heroes are facing one disaster after another, all in the course of a day.

Interesting points: Fascinating thing the author did with that situation I was unhappy about in Book 2. Plus, Mayberry does a very good job with creating characters who are different from one another. Lilah and Riot, for instance. They could easily have ended up being mirror images. I realized while reading that Chong is truly different from Benny. All this is probably important to me because I just read a recent adult novel with a lot of buzz in which the three narrators sounded so much alike that I thought I was going to find out that they were all the same person.

Rot & Ruin is an excellent series for older, sophisticated teen readers. I say that not just because the books are grim, though they are, and I mean that in a positive way. They also don't deal with black-and-white situations. As I've mentioned elsewhere, the zombies are often not the worst things that have to be dealt with in this world. They're deadly, but in a benign way. The relationships between male and female characters aren't your traditional teen boy meets teen girl romances, either. These are people who are badly scarred by their experiences and have life-and-death issues they care about beyond who is going to end up with whom.

There appears to be only one more book in this series. I will, of course, be reading it.

This is the ONLY book(s - haven't read third yet) about zombies that didn't completely seem ridiculous to me. SO well done.

And the most believable post-apocalyptic series I can recall reading.