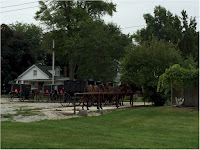 It sat in my Kindle until we were in the Amishland of Indiana while on our midwest tour last month. After a couple of days of being surrounded by buggies, I remembered that I could be reading about Amish vampires.


Chosen is a very traditional teen paranormal story about a girl who is unaware that her parents escaped with her from their Minnesota Amish community. But they didn't leave because they were hoping for a life with Internet access and a clothes dryer. No, they hauled out of there because vampires had taken over and their daughter was the one chosen to fight them. Jael is trained by her father and uncle in martial arts, though she doesn't know why. A hot Native American guy at her high school has a connection to the whole thing. And a cute friend with a car needs to be saved.

I wish there had been a lot more Amish and Amish culture to compare/contrast/clash with the standard high-school-student-finds-out-she's-special story line. Jael's family doesn't live in an Amish community but in rural Nevada. There's talk about the Amish once her parents 'fess up about what's going on. But we don't see any for quite a while. And then they're just bad guys in funny clothes. They also drive a truck and use a cell phone, which isn't what I was expecting from a book with "Amish" in the title. Of course, if you can accept that they're vampires, trucks and phones shouldn't be such a stretch. Additionally, though, I kept wondering where the father and uncle, having been brought up in an Amish world, got their knowledge of fighting, since the Amish are said to follow a policy of non-resistance to conflict.

The Amish world-building was on the weak side for me.

The Amish Bloodsuckers Trilogy has been completed, for those who like to binge read. In fact, the whole trilogy is available in a Kindle edition as well as in individual paper-and-ink books.

A little something I learned as a result of reading this book--I kept wondering why the author located the Amish community involved in the story in Minnesota. I knew there were significant Amish communities in Pennsylvania, Ohio, and Indiana,  so why not place her Amish in one of those states? Honestly, I thought she was making the Minnesota thing up.

Not at all. There are Amish communities in Minnesota, and what is particularly interesting about them is that they were founded in the 1970s. I was surprised to see that happening so recently. However, Amish communities keep growing each generation, and since they are primarily farmers, they have to keep spreading out to find more land.

Or maybe they have to keep moving because there are vampires among them.