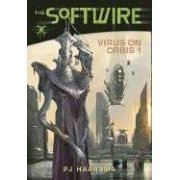 My knowledge of cyberpunk is limited to a few books by William Gibson, only one of which I can say I enjoyed. But I do think The Softwire: Virus on Orbis 1 by PJ Haarsma is an example of this sub-genre of science fiction.

Basically, Virus on Orbis 1 involves a large group of human children, no older than thirteen, who were born on a spaceship after all their parents (and the other adults with them) died while traveling to begin a new life on Orbis 1. The kids are raised for years by a computer they call Mother. They know they are going to Orbis, they know they are going to live there.

When they arrive, however, they find that their parents had indentured themselves in order to make the trip. Since the parents are all dead, the kids will have to work off the debt working for various aliens who are remarkably into capitalist enterprises. In order to understand all the different lifeforms there, the children are implanted with a translator chip. (Remember the universal translator on Star Trek?) This device also makes it possible for them to upload infromation from computers and thus learn what they need to know to get along in this new society.

This interface between man and machine is the cyberpunk element.

One boy, however, doesn't need the implant. He's a softwire--a living being who can interface with computers without any kind of implant. He's the only softwire known to have existed among humans.

Virus on Orbis 1 seems like hardcore science fiction, and this definition claims that cyberpunk, itself, is hardcore because of its reliance on technology or biology. Virus on Orbis 1 is also pretty good. Usually I find stories set on spaceships or space stations or confined places like Orbis 1 claustrophobic, but that didn't bother me with this book. And this book doesn't focus so much on the scifi that it forgets it's a kids' book. You have themes of identity going on here--Who were my parents? What am I, and why am I the way I am?

I found the climax somewhat chaotic and confusing, myself. To be perfectly truthful, though, I have to say I usually have some trouble with cyberpunk novels around the climax. The technical aspects of the story always get away from me. I'm not prepared to hold this against Orbis.

In fact, at a time when fantasy is riding high in kidlit, this is a good example of real science fiction.
Posted by Gail Gauthier at 5:09 PM
Email ThisBlogThis!Share to TwitterShare to FacebookShare to Pinterest