Is This An Allegory, Too? 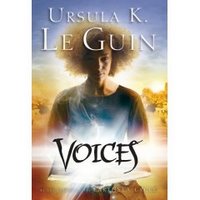 Imagine that you're reading about a culture that wants to impose its ideas on another. An occupying army is involved. People from each culture are suspicious of the other's spiritual believes. The status of women is dramatically different in the two cultures.

Are you reading a news article about the Iraq conflict or Voices by Ursula K. Le Guin?

The answer is obviously Voices because this is a litblog. This reader, though, wonders if the book isn't, at least in part, another allegory in which the characters and situations represent figures or events in narrative form. (I'm slicing and dicing Roger Sutton's definition of the "A-word.") The figures and events represented, of course, being the U.S. forces and Iraqis.

If I'm right, and this is an allegory, what am I to make of seventeen-year-old Memer, an off-spring (through rape) of both cultures? What about the resolution of this story? Is Le Guin predicting a possible outcome for our present impasse?

And what about the big cat? What does that represent?

Ursula Le Guin brought me to science fiction the year after I got out of college. She wasn't the iconic figure she is now. In fact, I think I became interested in her books because I read an article about how novel she was, a woman writing science fiction. She had already won a couple of Hugo Awards and a Nebula, which I guess is what a woman had to do back then to be written up as a science fiction writer. She had also, interestingly enough, already written a Newbery Honor Book.

Le Guin has always written children's/Ya literature, even long before it was cool to do so.
Posted by Gail Gauthier at 12:05 PM
Email ThisBlogThis!Share to TwitterShare to FacebookShare to Pinterest