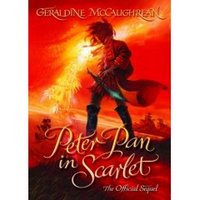 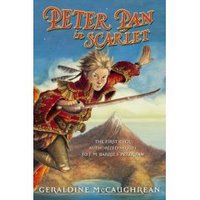 I am so glad Blogger is letting me upload images today so I can show everyone both the beautiful covers for Peter Pan in Scarlet by Geraldine McCaughrean. The British cover is to the left, and the American to the right.

The story is just as wonderful as both its covers.

I've heard grumbling about this authorized sequel to Peter Pan, a book I suspect many people have heard of but few read these days. I, myself, haven't read the original since I was in second grade. Peter Pan in Scarlet seems to have all the ambiance of an early twentieth century British children's book, though, and McCaughrean does a wonderful job of logically bringing the Darling children back to Neverland as well as dealing with all the elements from the original book while not letting them bog down her new story.

In fact, this new book is so marvelous it has inspired me to plan a Peter Pan and J.M. Barrie binge for January after I'm through with the Cybils.

Here is just one of the juicie points I love about this book. A character in the book offers to serve Peter. "Your butler, perhaps! Your valet? Your serving man?" When asked what he should be called, he says, "My mother gave me the name Crichton, but like most things a mother gives, it is not worth the having." And he tells them to call him something else.

Well, Barrie wrote a play, The Admirable Crichton, about a butler named Crichton who works for a wealthy family. He and his employers are all shipwrecked on an island where he becomes their leader (a Peter Pan figure?) because he is the only person who knows anything of a practical nature that can keep them alive. The young women of the family are all over him. He is a force to be reckoned with.

And then they are rescued, and the hierarchy of wealth and privilege over knowledge and skill is restored.

This is the kind of detail I absolutely love. I love it even more because so few people (at least here in this country) will probably get it.
Posted by Gail Gauthier at 10:31 AM
Email ThisBlogThis!Share to TwitterShare to FacebookShare to Pinterest

I hadn't seen the US cover for Peter Pan in Scarlet. I have to confess a definite partiality for the British cover, simply because it IS scarlet ! It looked very effective in the window display in the OUP shop on the High Street here in Oxford -and it made a really eye-catching window display !