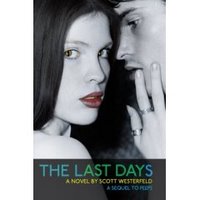 I really liked Peeps by Scott Westerfeld. I liked the premise, I liked the book's universe, and I liked the main character, Cal. I even liked his girlfriend, though I remember thinking she said "dude" way too much.

So I was looking forward to the sequel because I figured more Cal. Was I being unreasonable?

I'm not going to tell you how my wait turned out, because I don't like to give away a lot about other writers' books. But I will say I didn't get enough Cal.

The Last Days may be the rare sequel that readers might enjoy more if they haven't read the first book. Because they won't be missing Cal. Plus, in the first book all was revealed by the end. In The Last Days you have to go through all the revealing all over again.

I wonder if it wouldn't have been better to call The Last Days a companion to Peeps instead of a sequel. It deals with the same situation but comes at it from a different angle with different characters.

None of whom are Cal. Did I mention that?

I think there was some rock metaphor thing going on with The Last Days, too. Not that I don't like rock. I like to play it on the CD player in my car. I'm not particularly interested in creating it myself.

I could have done with a lot less rock and a lot more Cal.

By the way, I personally thought the ending of the book was kind of rushed. The author could have slowed down and, perhaps, given us more Cal.

Minerva was a good character, though. Kind of yummy. It would have been so interesting to see more of her with...Cal.

Well, that's not going to happen, so I'll just have to move on. One of the things I moved on to was this video review I found at Westerfeld's blog of one of his other books, Pretties. The review is a little long but hang in there because there's a laugh-out-loud moment toward the end.

Of course, it doesn't mention Cal.
Posted by Gail Gauthier at 7:03 PM
Email ThisBlogThis!Share to TwitterShare to FacebookShare to Pinterest

I missed Cal too.

I'd like to think that he, Parker (The Bermudez Triangle) and Nick (The Great Gatsby) are chatting away in the corner of a little bookstore somewhere, talking about how my adoration brought them together.

Because, come on, how cool would that be?

I, also, missed Cal. I still love both books, though.

Are you kidding me? No Cal?!
Ugh. He was the reason I enjoyed Peeps as much as I did.