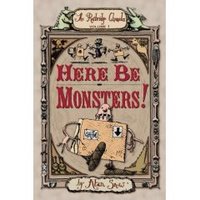 Guess what? I forgot to discuss one article in the September/October Horn Book. In Special Effects Deirdre F. Baker says, "Strange creatures, objects of power, unusual customs and foods, lengthy descriptions of landscapes, warty faces, and the spectacular show of magical weapons--physical description dominates current fantasy. In the movies "special effects" is often code for works eschewing depth and development of character, as well as intellectual content and originality--and these features have become rare and special indeed in fantasy literature for children and young adults."

I think this is a good lead-in to a review of Here Be Monsters! by Alan Snow not because Monsters eschews depth or is lacking in intellectual content. The book is meant to be fun, after all. But I do think the special effects outweigh the story.

Said story is, in fact, somewhat clichéd. You have an evil character plotting revenge because his family fell on hard times when he was young and a couple of other characters whose lives were wrecked back in their own younger days by said evil character. And then you’ve got wacky inventions, too. Everything comes together rather improbably at the end.

However, Here Be Monsters! is filled with Pythonesque creatures and characters. Cheese, for instance, is not a dairy product. It is a lifeform that bleats and has legs and is hunted a la foxes. (Though the cheese hunts are supposed to have been outlawed like fox hunting.) The cheese hunters ride atop fake burlesque horses operated by two other humans. The humans operating the horses take turns riding and the cheese hunters rotate down to take their turns as part of the fake horse.

Other strange creatures live under the ground, many of them being humanoid but shy. Trolls dress in boxes. Another group tie cabbages to their heads. Why?you may ask.

I don't know. Maybe because this is an English book?

Alan Snow is described as an "English artist, working with books, animation, film and computers." His fey little characters and his artwork are definitely his strong suits. The book has over 500 detailed black and white illustrations. Nearly every two-page spread has at least a small picture of some kind. The chapters are short. The vocabulary is sophisticated.

Kids may appreciate the special effects and not recognize that the story isn't anything special. Here Be Monsters! could be a decent book for a youngish child whose reading skills are strong but who isn’t ready to go on to those problem novels or nasty girl stories the older kids are reading.
Posted by Gail Gauthier at 5:21 PM
Email ThisBlogThis!Share to TwitterShare to FacebookShare to Pinterest

Trolls dress in boxes. Another group tie cabbages to their heads. Why?you may ask.

I don't know. Maybe because this is an English book?

You could certainly argue that Alan Snow is continuing the great British tradition of eccentrity. Personally I thought the book was quite good fun for younger readers...

Yes, I do think it could find an audience there.