Finding readers is difficult for all books. There are so many of them out there, more than there are people to read them. The chances of any individual title being discovered by readers isn't that great. For self-published books, discoverability is even worse. They don't have as much access to reviewers, sales people, booksellers, you name it. What's more, there may be even more of them. So the chances of any individual title collecting a following is even less likely than for traditional books. And for self-published eBooks--worse yet. Those authors are limited in terms of making public appearances at book fairs, festivals, and stores because they have nothing the sponsoring agency/business can sell.


Book awards can help with discoverability by bringing attention to titles. Some awards bring more attention than others. There are all kinds of things that come into play. Some awards may bring prestige but not much in the way of sales. In children's literature, for instance, the state readers' choice awards don't carry the kind of prestige the Newbery, Caldecott, and Printz awards do, but I've heard that just being nominated can really generate sales. Public and school libraries buy copies, sometimes multiple copies, to have available for child readers during the voting period. State readers' choice awards may truly be a case in which just being nominated is the honor/benefit. I know I had a book go into a second printing because it was nominated for a state award just at the point when the first printing was nearly gone.


All of which brings me to this year's Writer's Digest Self-Published e-Book Awards. I noticed the spread on this award in the May/June Writer's Digest because I republished Saving the Planet & Stuff as an eBook, and I'm dwelling on STP&S-related material all month long. So, there, I managed to squeeze it into this post. Now I'll move on to this award.

The Writer's Digest Awards are self-nominated and there is a fee, which is not unheard of. Various winners receive a variety of prizes that could include cash, review opportunities, and book marketing consultation. The award is described as "a competition that spotlights today’s self-published works and honors self-published authors." I don't know who the judges are, if there are different judges for each category, or how the books are judged. One interesting thing I noticed with the winners in this eBook division is that all but one of the winners had a paper-and-ink edition in addition to the eBook edition. Which makes me wonder what the criteria is for submitting. 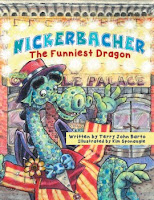 Children's Picture Books: Nickerbacher, The Funniest Dragon by Terry John Barto with illustrations by Kim Sponaugle. While I find the marketing for this book a little heavy on self-esteem vs. story, I like the basic premise of that story. This is a book about a dragon who wants to be a stand-up comedian. That sounds promising.

Middle-Grade/Young Adult Fiction: Flicker by Melanie Hooyenga. Flicker sounds like another paranormal story. EXCEPT there is also a crime aspect that I find intriguing. Again, that sounds promising.


A Seemingly Unrelated Point, But Not


I'd like to note that both Barto and Hooyenga have professional looking websites, as does illustrator Sponaugle. I feel it's necessary to point that out, because sometimes self-published authors don't. Maybe more than sometimes. Sometimes they have nothing at all or they're limping along with a Facebook page or a blog. Maybe a blog they don't spend much time on.

Why is this related to book awards? Remember, my theory is that the big value of book awards is discoverability for a book and for an author. You get some attention because of the award, people take notice, and what do they find when go looking for you? Nothing. Or they find something that indicates you don't understand professional marketing.

I'm not a big fan of writers creating websites before they've even finished writing a book/story/essay/whatever their genre. But once you're published, it really is a professional necessity. And certainly if you're at the point of submitting your published work for awards, you need to have a website, as the people above do, in case you win.

Thank you so much for including me in this post! What you say is spot on -- self-publishing is a never-ending hustle, so getting this recognition from Writer's Digest is huge. And I'm glad you approve of my website!

I've been hustling with something regarding one of my out-of-print books this past week. Really brings home what publishers/agents do for writers.