For a couple of years I've been keeping track of what I've been doing each week, making sure I've been spending time on my yearly goals. My inspiration for this came from a book called 18 Minutes by Peter Bregman. Eventually, I added  working with a content marketing calendar to this. Both the goal check and the content marketing calendar have been working well for me. I've been getting more work done (goals) and getting my blog posts out in the world regularly.

Until the last couple of months.

I went on retreat in January. I came back sick, and the sickness turned into bronchitis. I wasn't flat on my back, but up-and-down, lying around on the couch, replacing meals with ice cream. I was doing better when, at the beginning of February, the vehicle I was driving home from writers' group was hit by a flying tire. I wasn't injured, but lost another day to dealing with the fallout from that. (By the way, my suv still isn't back from being repaired.) 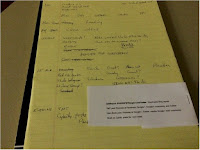 So I had a few weeks when I wasn't at the top of my game. I slipped up on yellow pad planning (which some day could be as famous as bullet journals) altogether, and even when I got around to doing that, I dropped the ball with the content marketing calendar addition (the white section in the picture to your right). And then a few weeks led to some more weeks.

This doesn't speak well for the power of habits. I'd been maintaining content marketing calendars since last spring (I think) and my yellow pad planner for much longer. Shouldn't those actions have been habits? Well, Kelly McGonigal warned me.

So, What Are You Going To Do About This, Gail?


Last week I managed to get back on the content marketing calendar wagon. I've made one for this week, too, though I'm behind in creating my yellow pad plan. (I was on the road all day today, okay? But we're having a blizzard tomorrow. I should be able to do it then.) But I managed that by simply gritting my teeth and soldiering on. I don't think that's going to work for long.

Back in 2013, I did a post on a talk McGonigal gave on habits. Two of her suggestions that might help me:

"Automatic Goal Pursuit--This is different from habit. You're trying to keep goals in mind instead of relying on automatic habits. You are always focusing on the goal, instead of behavior." I'm kind of obsessed with goals, anyway.

"Distress Tolerance--Work on becoming comfortable with uncomfortable situations, the distress of wanting. For time management for writers, this could mean becoming comfortable with working alone, which could go a long way to control the "craving" or desire to keep checking your e-mail/Facebook wall hoping for some human contact." Distress here can mean anything--the struggle to finish writing a paragraph. The overwhelm felt about starting a new writing project. Fear of having work rejected. Or the discomfort of maintaining some kind of workload while sick or getting back to work after a break. I'm not as keen on distress tolerance as I am on goals, so clearly this should be something I'm focusing on.

For You Yoga Folk


The February, 2017 issue of Yoga Journal carries an article by Kate Siber called Fuel Your Willpower to Transform with Tapas. According to Siber, tapas is translated from Sankrit as self-discipline. She says, "On a psychological level, tapas can be interpreted more metaphorically: It’s the friction or resistance that arises when we go against the overwhelming momentum of our ingrained habits."

That "friction," "resistance" sounds like the distress McGonigal talks about. Siber comes up with a very quick and easy reason for becoming comfortable with it, so you don't use distress to avoid sticking with a task important to you. "The yoga greats, including B.K.S. Iyengar, knew the power of the seemingly simple concept that self-discipline allows for growth and transformation."

That's assuming we want to grow and transform, of course.

You remember I mentioned that this article is in Yoga Journal, right? Well, with the article comes a yoga series to help build tapas, or self-discipline. The theory is "When we practice tapas on the mat, we practice sitting with whatever sensations and conversations arise for  us, without running away." (Heather Lilleston, founder of Yoga for Bad People. Gotta love that name, don't you? I do, anyway.)

Without running away, people. Running away is what we're doing when we give in immediately to the desire to surf on-line instead of making a content marketing calendar for the week or lie in bed reading instead of getting to work on yellowpad planning for the week.