Can You Market To Grandma And Junior, Too? 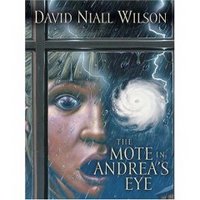 I became interested in The Mote in Andrea's Eye for two reasons. One, it was begun as part of a National Novel Writing Month project, raising the possibility that I should try writing a book again this November. Two, the book's publisher (Gale/Five Star) chose it for its Clean Reads program, raising the possibility that it is appropriate for all ages.

In recent years a number of books have been cross-over hits between age groups, and the Young Adult Library Services Association names 10 such books each year to its Alex Awards list. The youth market for adult books has become large enough that publishers of adult books are intentionally seeking youth sales.

In a cbc.com article entitled Sharing the Love: How publishers are rebranding adult fiction for young readers Andre Mayer says:

"The fact that teenagers are picking up ostensibly grown-up fiction is hardly novel. I remember spending recesses in Grade 7 thumbing through Sidney Sheldon’s salacious trash with other curious 12-year-olds. And lest I forget my high-school English reading list, which included gems like The Apprenticeship of Duddy Kravitz, as well as a whole lot of tedious, self-consciously portentous fiction. The difference nowadays is that publishers and vendors are becoming more proactive with young bookworms." (Italics are mine.)

Mayer goes on to say, "There’s no fail-safe formula for winning over teens, but The Curious Incident, Life of Pi and, to a certain extent, The Girls provide hints as to what it is in adult fiction that engages young readers. All three narratives feature youthful protagonists, are told in the first person and exhibit a healthy scepticism about grown-up behaviour."

Gale/Thorndike's description of its "Clean Reads," on the other hand, goes like this: "A mix of appealing, wholesome general fiction, mystery and romance titles. These are stories without graphic violence, explicit sexuality or strong profanity. These are entertaining stories, full of encouragement, warmth and humor that you’d be comfortable giving to your grandmother!"

I'm not seeing much overlap between those last two paragraphs. Yet the cover the publisher slapped on Andrea's Eye definitely looks as if it's going for a younger crowd.

The Mote in Andrea's Eye is short on youthful protagonists--the child in the first portion of the book grows up rather rapidly and does, indeed, end up old enough to be someone's grandmother. It's also long on technical detail. I don't think that necessarily kills it as a book for younger people. Andrea's Eye is a thriller about trying to control hurricanes. I can remember teenagers and even grade school kids reading Michael Crichton's thrillers, which can be a little on the techie side, too. Nor is Crichton noted for his first-person, young-adult narrators.

So, as Mayer said, "There’s no fail-safe formula for winning over teens..." I do think, though, that publishers that really want to do it, should do some research. A clean book you'd feel comfortable giving to your grandmother is not necessarily a book a teenager is going to want to read.

This particular clean book went over well with my computer guy, though. He liked the monster hurricane, character lost in time, and guys huddled around monitors.
Posted by Gail Gauthier at 10:54 AM
Email ThisBlogThis!Share to TwitterShare to FacebookShare to Pinterest

Thank you for the review! I didn't really write the book to BE a young adult novel, I just felt (particularly after my 14 year old daughter loved it) that it would be appropriate because I held back all the adult content that could have muddied the plot...

In any case, tell your computer guy thanks as well.