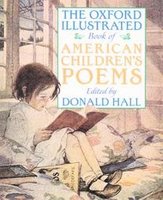 I don't usually take part in Poetry Friday with other kidlit bloggers because I'm not that into poetry. However, ever since hearing that Donald Hall, the author of Ox-Cart Man, has been named poet laureate, I have, at least, become interested in him.

So on one of my many trips to my local library, I looked for something by the fellow. All I found was The Oxford Illustrated Book of American Children's Poems, which Hall edited.

In his preface, Hall says (among other things), "Many children's magazines of the 19th and early 20th centuries required verses for recitation, for laughter, or for sleepiness at bedtime. Some of the best of these poems have gradually disappeared.

Here we mean to bring them back into light."

"...for recitation, for laughter, or for sleepiness at bedtime." Excellent reasons for poetry no matter what the reader's age.

Among my favorites from this collection:

Alphabet from The New England Primer, 1727:

The poem for the letter T--

In case the child reader isn't clear on what that means, the offering for "X" leaves no doubt--

"Xerxes the great did die/And so must you and I."

I don't think this was one of the sleepiness at bedtime poems. But it certainly packs a dramatic punch.

I think we should pay more attention to the last stanza rather than the first. I was only familiar with the first four lines.

"What makes the lamb love Mary so?"
The little children cry;
"Oh, Mary loves the lamb, you know,"
The teacher did reply,
"And you each gentle animal
In confidence may bind
And make it follow at your call,
If you are always kind."

When I was a child, I loved this poem about the elderly woman who insisted on waving the stars and stripes as Confederate soldiers marched through her town. Most moving, of course, was Stonewall Jackson's order,

"Who touches a hair on yon gray head
Dies like a dog! March on! he said."

Oh, dear. I just destroyed everyone's enjoyment of an American classic. This is why I shouldn't discuss poetry.
Posted by Gail Gauthier at 7:39 PM
Email ThisBlogThis!Share to TwitterShare to FacebookShare to Pinterest