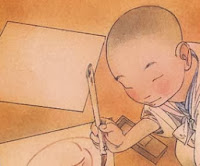 Okay, so you remember a few days ago I said I was going to do a blog post about a discussion I had with David Johnson at the Connecticut Children's Book Fair? And you've been waiting and waiting for me to get around to that? Well, wait no longer.

David pointed out that his book, The Boy Who Drew Cats, was published by Rabbit Ears Entertainment, a Connecticut company. Rabbit Ears, Rabbit Ears, I thought. I started accessing my memory files. David is telling me that Rabbit Ears made children's videos with narrators such as Meryl Streep. Rabbit Ears...Rabbit Ears...goes the google search  in my mind.

"Theater?" I may have said out loud.

David had done the art work for some of the Rabbit Ear videos, The Boy Who Drew Cats being one of them. And now Rabbit Ears had published the story as a picturebook with the art David had done for the video and perhaps more. I was busily going Rabbit Ears? Rabbit Ears? and wasn't as mindful with my listening as I should have been.

You all know I am just obsessive enough not to have left this alone. And after seeking out the Rabbit Ears website, I found what I was trying to remember, not Rabbit Ears Theater but Rabbit Ears Radio, a program on public radio distributed by Public Radio International in the 1990s. It sounds as if the radio productions were the audio of the video productions. Rabbit Ears Radio brought a marvelous and really different angle to public radio, which is news and arts for adults.

Rabbit Ears Entertainment appears to be publishing picture book versions of its videos, which is interesting because usually it goes the other way--the book comes first and then a film version.

I remembered Rabbit Ears!!! I used to listen to Rabbit Ears all the time when I was little! Some of my favorite stories were The Fool and the Flying Ship, John Henry and The Fisherman and his Wife! What were your favorite stories?

While I remember the program and listening to parts of a few stories, I don't remember any particular one.