My One-Hour Tour Of The Connecticut Book Fair 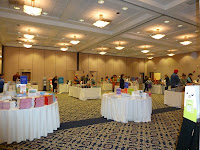 I was only able to get to the Connecticut Children's Book Fair for one hour yesterday afternoon, but I had a particularly good time. I wasn't able to attend any author or illustrator presentations, but I did get around the room meeting people. 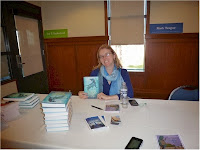 My first stop was with Tui T. Sutherland, author of the Wings of Fire series. I heard on Twitter just this past week that Wings of Fire made the NYTimes series bestseller list. Tui also writes under other names, meaning she is producing a lot of work. And yet she doesn't look worn out or exhausted. 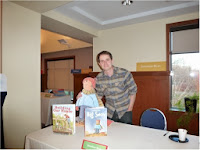 Then I talked with Jonathan Bean. Jonathan has won awards for both his writing and his illustrations. I've been seeing his newest book, Big Snow, mentioned all over the place. 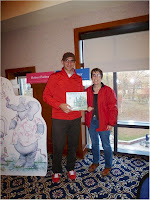 Terri Goldrich, co-chair for the fair and curator of the Northeast Children's Literature Collection, for which the Connecticut Children's Book Fair provides support, happened by when I reached Aaron Becker and offered to take a picture of us together. Don't know how he felt about that, but I jumped right into the frame and forgot all about getting a photograph of him by himself. I had a copy of Aaron's book, Journey, at home. Another book and author/illustrator who happen to be getting a lot of attention right this minute. 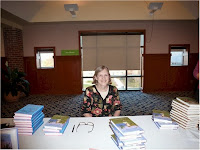 I hustled across the room to meet Ann M. Martin because I heard some people talking about her around one of the book tables. Ann created The Babysitter's Club and continued writing the series for years. She's also the author of stand alone novels. Particularly interesting moment when I was with Ann--my first picture of her included a woman who was assisting her with signing stock. She was there from Ann's publisher. That is the big time. 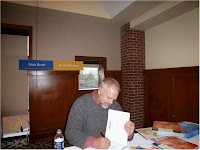 The man to my right is David Johnson. He's going to get his own Original Content post later this week because we got into a discussion of something that I want to go on about for a while. It's also something that will make a good Picture Book Month post. One of the books he was signing yesterday was The Boy Who Drew Cats. 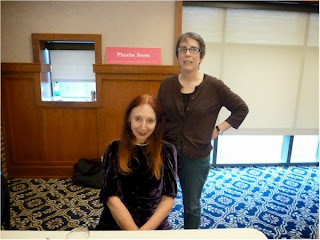 Phoebe Stone,author of The Romeo and Juliet Code and eight other books for young people, including a Romeo and Juliet Code sequel was the reason I got myself to the fair yesterday. Phoebe and I attended the same high school, though at different times. I knew her younger sister, Abigail Stone, also a writer, when we were in either eighth or ninth grade. Phoebe now lives in a town in Vermont that borders my hometown. In fact, my father was born there.

I am kind of freaked out by this situation, though I have some family members who would probably tell you that I'm freaked out rather easily.

Well, Gail if it's any comfort to you, Laura Ingles Wilder's family is from Whiting (my town, next up from yours...very isolated and sparely populated and lonely! I mean her mother lived there and then I think they moved to the Midwest before Laura was born...There are records at the town hall and the town clerk knows all about the Ingles family. I should follow up on that and find out which old house was theirs...Anyway, I think that's pretty weird too. That area must be enchanted....That must explain it all!
Great to meet you!
Phoebe Stone

Oh, my gosh, Phoebe! That's incredible! I have a lot of relatives who will be interested in hearing that. I wonder how populated Whiting was then?

There are some very nice drives in Whiting. I particularly liked going past that church at the four corners where the bookstore is/was.

Thanks for the heads up on some great new authors and titles to search. Happy reading!