Rethinking Richard Scarry And Those Animals Who Drive Trucks 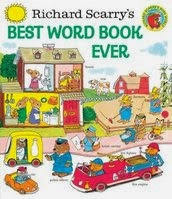 Last month's Carnival of Children's Literature included Playing by the Book's post on a new edition of Richard Scarry's Best Word Book Ever. I'd been planning to share that this month, anyway, but a quick conversation with a family member earlier this week made me decide to blog about it sooner rather than later. The family member didn't remember Richard Scarry, possibly because his mother didn't care for the author and moved him out of those books as fast as she could.

What was my...er...her objection to the Scarry books? No narrative. She was a story person and needed something happening to somebody with her reading.

No harm was done, but in thinking about Richard Scarry recently, I realized that this is another situation in which adult gatekeepers and children aren't necessarily going to be interested in the same things. And do adult interests have to trump every time?

Sometimes, I decided, when you're sitting with a two- or three-year-old, you just have to suck it up and look at random pictures of bears dressed in clothes and riding around in vehicles. There are worse things you can be doing.
Posted by Gail Gauthier at 10:05 PM
Email ThisBlogThis!Share to TwitterShare to FacebookShare to Pinterest
Labels: Picture Book Month, Picture books

That family just had the wrong Richard Scarry book. The one that was about different countries had a story on every spread.

Clearly an author I should be brushing up on.