Can This Picture Book Be Saved? 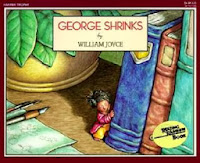 My library is running a little project in which the staff is asking the public's opinion about culling some picture books from the collection. We get to vote on specific titles, one of them being George Shrinks by William Joyce. I am a Joyce fan, so I expected to vote to keep it just on principle. Come on. Joyce.

It turns out, though, that George Shrinks is better than I remember, mainly because I remembered nothing about it. It's a Kafkaesque tale about a child who wakes up, not a bug, but tiny. And he manages just fine on his own, thank you very much.

Though why is he on his own? Merely an adult question, or is it significant here?

In addition to being a good book, George Shrinks inspired a PBS series that's still running. I'm a big believer in connecting series like that to their print versions. It seems like a golden opportunity to encourage a littlie with reading.

So you can guess how I'm voting.