I often hear that networking is one of the big side benefits of any professional gathering. Wheeling and dealing and making connections with people who can help you is supposed to lead to all kinds of good things. Intellectually I get that. Practically speaking, you could make an argument that I don't even know what networking is. Though I do know not to follow editors or agents into an elevator or public restroom and "network" with them there. I've heard about that happening at professional writer gatherings, too.

Yes, I'm one of those folks who tries to time her arrival and departure at events so as to get as little of the meet and greet and fun evening stuff as possible. What I do really like at a writer gathering, though, are the bits and pieces of writer talk you pick up at odd moments. Examples from this past weekend's retreat:


On Friday night I met a writer who is also an Episcopal minister.She's working on a YA historical novel dealing with a Biblical figure. (I'm thinking maybe something like Not the End of the World by Geraldine McCaughrean.) We got into a discussion of sermons (of which she has written many) as essays. She pointed out that the formal essays of the nineteenth century involved making arguments, whereas many ministers today use story in their essay/sermons. (Creative nonfiction?) Church attendance, she said, is supposed to be a transformative experience. (Now that I think about it, I believe I've read that reading is supposed to be, or often is, a transformative experience.) She wondered if an essay developed as a story would be as transforming as an essay developed around an argument created to convince listeners. Seriously, if you're into essays, this kind of discussion is golden.

On Saturday morning, a writer in my critique group told us about using YouTube for research. She's working on a book that is set, in part, in China, and she found YouTube videos of Chinese factories. Just what she needed. This is marvelous news. Need some convincing? Laura Hillenbrand, who suffers from chronic fatigue syndrome and is extremely limited in how far she can travel and how long she can work, researched Seabiscuit on eBay. Before she wrote the book, Seabiscuit memorabilia was dirt cheap. The Internet is also golden. 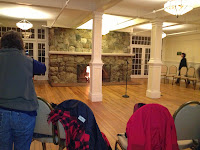 Saturday night, we had a sort of open mic night, with volunteers doing short readings for the group. We're gathering beforehand, and I start thinking, Oh, shoot. I keep forgetting. I don't like listening to readings. Should I run? But readings are much more enjoyable when you know some of the readers. And the readings are very short. And there's cake. Something to keep in mind.


Finally, on Sunday morning I was walking to our meeting room with an editor, and we're talking about the hero's journey. The hero's journey freaks me out because of all the steps and charts associated with it. So I was telling her about a Salon essay I read in which the author argued that the hero's journey was a cliche, particularly in movies and YA literature, and that viewers and readers are getting tired of it. The editor said something along the lines of, "Oh, I totally disagree. The whole point of the hero's journey is that, if done properly, it fits every story. It's just more obvious in some than in others." Now, she didn't make me a believer in the ol' journey of the hero by any means. (Did you look at those charts?) But what struck me about that conversation was that it was a conversation.


So much of what I take in about writing, my work, is through reading. I don't get anyone else's take on it, because a writer can go a long time without being with another writer. And then you've got to find another writer who has read the same piece you read and cared enough about it to file some memory of it away. I like to think I'm a moderately analytical person with a data base of writing knowledge to apply to anything I read. But it's still just me, me, me. It's really quite marvelous to hear someone say something about the things I've been thinking about, even if I don't agree with it.

And youtube. I've been watching moths break through cocoons, details I couldn't get through books, or life -- in which case I'd need much more time.