Today author Laurel Snyder has a post at her blog relating to the Goodreads Best Picture Book of 2013 nominees, which are almost all written by men. (In defense of the list, this is the final round. There were more titles originally, though I have no idea how well women were represented.) She points out that the Goodreads' final round list was made by Goodreads' readers (after voting on that earlier list.) The earlier list that the final round list came from may have been determined through some kind of popularity figures available to Goodreads from its readers.

Laurel asks, "WHAT’S GOING ON? Do men actually just make better picture books than women? Do men get better marketing and publicity budgets than women for picture books?  Or… as I’m beginning to fear… do we, the (largely) women who buy and blog about picture books have a tendency to elevate books by men?" 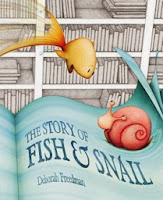 She then lists picture books published by women this past year, recommended to her by readers posting in comments.

If you are a children's litblogger who belongs to the Kidlitosphere community, that group has been discussing this issue today at its listserv.
Posted by Gail Gauthier at 6:55 PM
Email ThisBlogThis!Share to TwitterShare to FacebookShare to Pinterest
Labels: illustrators, Picture Book Month, Picture books