The Heart Of The Matter Weekend 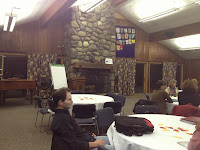 On the first night of the Falling Leaves Novel Master Class Retreat, Kathy Dawson of Kathy Dawson Books ran a program she called The Heart of the Matter. It involved participants creating pitches, summaries, and catalog, back cover, or flap copy for their manuscripts, not for the sake of preparing marketing materials but to help them seek out a deeper element of their stories. The point was to help participants pinpoint what they believed they were saying in their books so they could make sure it was, indeed, in the books.


The other editors totally got what Kathy was talking about and "the heart of the matter" was referred to over and over again over the weekend. I, however, didn't get it until towards the end of my meeting with Mallory Kass during the critique of the material I'd submitted. She kept talking about why my protagonist wanted to do what he was doing? And what about that relationship with his brother? How about making the older brother more of a problem child? I thought I'd been clear about why he wanted to do what he was doing, and was she talking about some kind of trite teen angst thing for the older brother? Hey, I don't do trite. 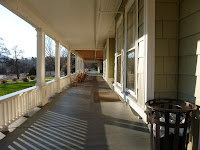 And, then, right there on the porch where we'd been talking for about fifteen minutes, I suddenly realized that there was something deeper going on with my protagonist. I had even hinted at it a few times. And his relationship with his brother could be a big part of it, in a very nontrite way. This book had a heart to its matter that I had only been toying with.

Not every book will have some kind of deeper heart, and not every book has to. A book that's all about action, in which the action is the point, can often get along with just that. But if you have a story that does, indeed, have a deeper element, maybe something thematic, maybe a so what?, why not find it and bring it out, like a thread in a the pattern in a piece of material?

Back in the Dark Ages when I worked for a management and personnel consulting office, we ran workshops and distributed evaluations to participants after the events. The professors were concerned about the halo effect, the tendency to believe that because you had a good time at a workshop, liked the instructor, and enjoyed the lunch, the content of the workshop must be good, too. Participants who evaluated a workshop at the end of the day and again a few weeks later, often gave lower scores on the second go-round. By that time, the glow was off and they'd had a chance to see whether the workshop content had been beneficial to them.

If I had evaluated the Heart of the Matter presentation on Friday night, right after hearing it, my response would have been, "Yeah, this is okay." It was only in the context of the whole weekend that I appreciated what the "heart of the matter" is about and how it could impact my work. In a twist on the halo effect, I would rate it higher now that more time has passed.

Great post about our wonderful weekend! I gained so much insight into my own process and writing from the editor presentations. And I will never again write without keeping the "heart of the matter" in my thoughts. Awesome! :) Great meeting you!